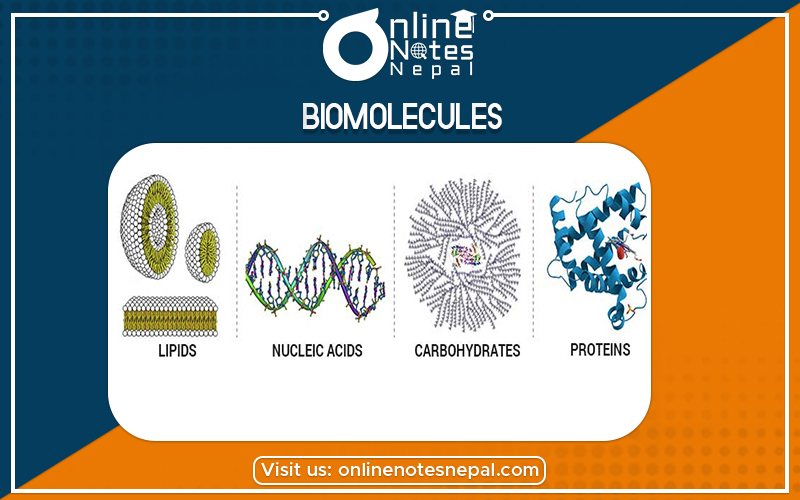 Biomolecules are the organic compounds that form the basis of life, i.e., they build up the living system and responsible for their growth and maintenance. A biomolecule or biological molecule is a loosely used term for molecules and ion present in organisms that are essential to one or more typically biological processes such as cell division, morphogenesis, or development Bio-molecules include large macromolecules (or poly-anions) such as proteins, carbohydrates, lipids, and nucleic acids, as well as small molecules such as primary metabolic, secondary metabolic and natural products. A more general name for this class of material is biological materials. Biomolecules are usually endogenous, produced within the organism but organisms usually need exogenous biomolecules, for example, certain nutrients to survive. The sequence that relates molecules to a living organism is

Optically active polyhydroxy aldehydes (aldoses) or ketones (ketoses) or compounds which on hydrolysis give these units are known as carbohydrates. They are also called saccharides

(Latin Saccharum = sugar) due to the sweet taste of simpler members.

Depending upon their behavior towards hydrolysis, carbohydrates can be of the following three types

These cannot be hydrolyzed to simpler molecules and further subdivided into tetroses, pentoses, or hexoses depending upon the number of carbon atoms. These are also called homopolysaccharides.

Killian synthesis is used to convert an aldose into the next higher aldose.

(Greek oligos = few). On hydrolysis, they generally give two to nine monosaccharides (same or different) and are further classified as, e.g., sucrose, maltose, lactose, trisaccharides and so on. C12H22O11 is a disaccharide because it gives two monosaccharides.

The bond formed between two monosaccharides is called a glycosidic bond and normally it is a (1, 4) bond.

Sucrose is most abundant in plants and known as cane sugar or table sugar or invert sugar as an equimolar mixture of glucose and fructose is obtained by hydrolysis of sucrose. 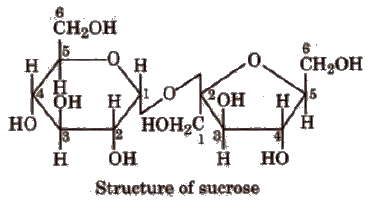 These are polymers of monosaccharides. Examples are starch, cellulose, glycogen, etc.