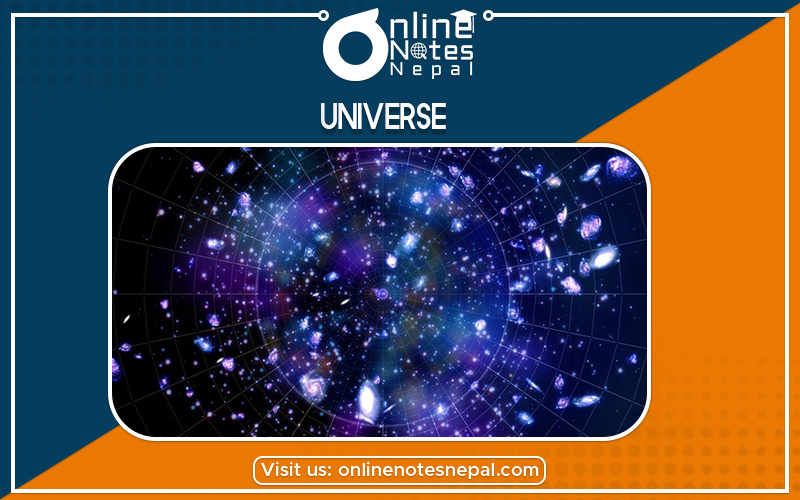 The Universe is everything we can touch, feel, sense, measure, or detect. It includes living things, planets, stars, galaxies, dust clouds, light, and even time. The Universe contains billions of galaxies, each containing millions or billions of stars. The space between the stars and galaxies is largely empty.

The distance between the earth and sun is measured in the astronomical unit.

The distance traveled by the light in one year is called a light-year.

The distance at which the mean radius of the earth subtends an angle of second of arc is called parsec.

A constellation is a group of stars that make an imaginary shape in the night sky. They are usually named after mythological characters, people, animals, and objects. In different parts of the world, people have made up different shapes out of the same groups of bright stars. It is like a game of connecting the dots.

A galaxy is a huge collection of gas, dust, and billions of stars and their solar systems. A galaxy is held together by gravity. Our galaxy, the Milky Way, also has a supermassive black hole in the middle. Some scientists think there could be as many as one hundred billion galaxies in the universe.

Our solar system is in the distance of 30000 light-years from the Milky Way galaxy. The solar system is composed of the sun, eight planets including the earth, satellites, asteroids, comets, meteorites, etc. The distance in the space is measured in the term of a light-year.

A planet is a large object such as Jupiter or Earth that orbits a star. Planets are smaller than stars, and they do not produce light. A star and everything which orbits it are called a star system. There are eight planets in our Solar System. They are:

Asteroids are rocky worlds revolving around the sun that are too small to be called planets. They are also known as planetoids or minor planets. There are millions of asteroids, ranging in size from hundreds of miles to several feet across. In total, the mass of all the asteroids is less than that of Earth's moon.

A comet is a ball of mostly ice that moves around in outer space. Comets are often described as "dirty snowballs". The orbital inclinations of comets are usually high and not near the ecliptic where most solar system objects are found. Most of them are long-period comets and come from the Kuiper belt.

A meteoroid is a small space rock moving through a solar system. If a meteoroid enters the Earth's atmosphere, it's called a meteor, or shooting star. If part of that meteor survives the trip through the atmosphere and hits the Earth, it's a meteorite. A lot of meteoroids never end up being meteors or meteorites.

Stars are the luminous bodies that produce energy inside the core by nuclear fusion. There are large clouds of hydrogen gas called nebula and other materials. When the clouds and other materials attain a certain size, they start to contract due to the effect of gravitation among them. Finally, these clouds are compressed to highly condensed mass. As a result, a protostar is formed. The protostar again condenses due to gravity and the clouds heat up and the pressure and the temperature also increase. At last, the core of the protostar gains very high pressure and temperature, and this results in the nuclear fusion reaction which provides enormous energy to the new star. This way, stars are formed. After a certain period; the hydrogen gas gets turned into helium gas. When helium gas cannot fuse with each other, there is an inward gravitational pull, the star contracts continuously, and temperature in the core further increases. This causes the expansion of the outer layer and the size of the star. The size increases considerably. A stage comes when the star becomes very large in size and red in color. This red star is called a red giant. A star remains a red giant for million years. At the end of the stage, there is an enormous release of energy that causes violent explosion called a supernova. The star gets scattered and after some interval of time, its brightness finishes. This is called the death of the star.

Black holes are the remnant of stars so condensed that their gravitational force pull can even prevent light from escaping them. If the initial mass of the star is five times the mass of the sun, then the red giant of that star will form a black hole.