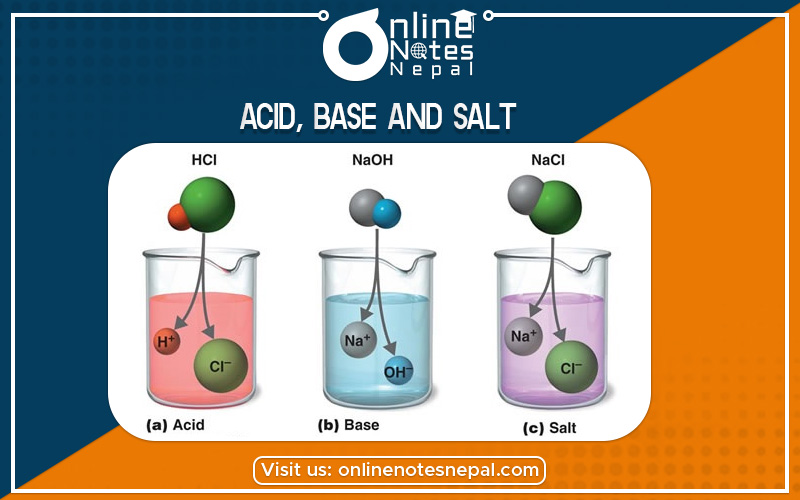 Acid: An acid is a chemical species that donates protons or hydrogen ions and/or accepts electrons. ... The word acid comes from the Latin words acidus or acere, which mean "sour," since one of the characteristics of acids in water is a sour taste e.g., vinegar or lemon juice.

Salt, in chemistry, the substance produced by the reaction of an acid with a base. A salt consists of the positive ion (cation) of a base and the negative ion (anion) of an acid. The term salt is also used to refer specifically to common table salt, or sodium chloride. They are neutral compounds, which are formed by the reaction between acid and base. Example: NaCl, CaCL2 etc.

Normal salt: The salt formed by the complete displacement of hydrogen atoms by a metal or electropositive radicals. They are neutral in nature. For e.g.: NaCl, KNO3, etc

Strong salt: The salt formed by strong acids and a weak base. E.g. CuSO4

Basic salt: The salt formed by weak acid and strong base. E.g.Ca (HCO3)2

Methods of preparation of salts

They are as follows:

Neutralization of acid and base

The characteristics of salt are:

Indicators are the chemical substance used to identify acidic or basic nature of the substance.

A universal indicator is a special kind of indicator which is used to measure the strength of acidity or alkalinity. It is prepared by several organic indicators of different colours. It is found in green-blue solution or in the form of yellow litmus paper.