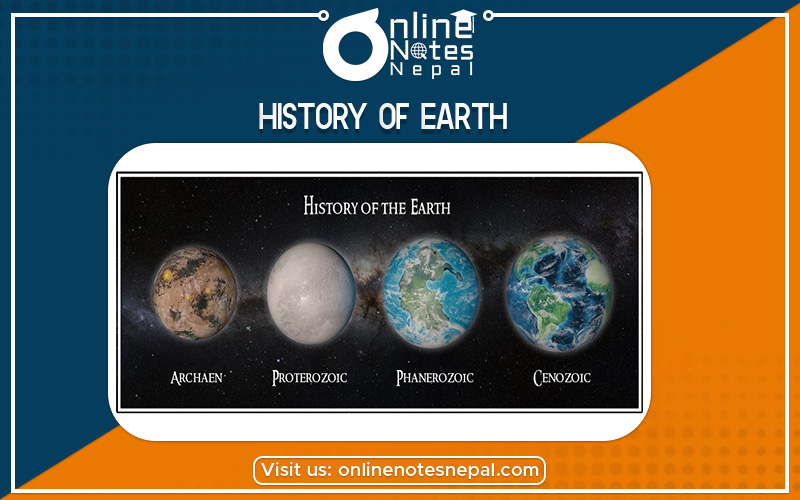 The history of Earth covers approximately 4 billion years (4,567,000,000 years), from Earth's formation out of the solar nebula to the present. Earth formed as part of the birth of the solar system: what eventually became the solar system initially existed as a large, rotating cloud of dust and gas.

There is a certain hypothesis about the origin of the earth and they are given below:

This hypothesis states that the earth was formed from the collision of the gases mass and comet. When they collide a huge amount of matter was thrown which is later cooled to form planets. These dust and gaseous combined due to the pull of gravity and form a huge mass of materials.

The planetesimal theory is a theory on how planets form. According to the planetesimal hypothesis, when a planetary system is forming, there is a protoplanetary disk with materials from the nebulae from which the system came. This material is gradually pulled together by gravity to form small chunks.

Dust cloud hypothesis: This hypothesis states that the sun and planets were formed from a large amount of clouds and gases. These dust and gaseous combined due to the pull of gravity and form a huge mass of materials. Thus formed mass became the sun and solar energy was produced by nuclear fusion.

Tidal hypothesis: It is one of the modern hypotheses of the origin of the earth and the solar system. Jeans postulated his hypothesis on the basis of certain axioms (self-proved facts). The solar system was formed from the sun and another intruding star.

The time scale that includes the earth's origin to present is called the geological time scale. This age of the earth is divided into three eons they are as follows:

This eon is divided into three eras.

Cenozoic era: Cenozoic Era began about 65 million years ago and is still continuing. It is divided into two periods. Quaternary and tertiary. The wide variety of plants and animals that we know today came into existence during the Cenozoic Era.

Paleozoic era: Paleozoic era began 540 million years ago and ended 250 million years ago. In this era, the plants and animals were found to have developed which was found from the studies of the fossils that remained in sedimentary rocks. Similarly, it is also believed that there was a change in the atmosphere and weather. This era is divided into six periods.

B. Proterozoic Eon: The well-identified events of this eon were the transition to an oxygenated atmosphere during the Mesoproterozoic; several glaciations, including the hypothesized Snowball Earth during the Cryogenian period in the late Neoproterozoic; and the Ediacaran Period (635 to 542 Ma). It was extended from 570 million years ago to about 2500 million years ago. In this eon invertebrates and cryptogams were evolved.

Fossils are the remains or traces of ancient life that have been preserved by natural processes, from spectacular skeletons to tiny seashells. Imprints, tracks, and trails can also become fossilized, like dinosaur footprints or worm burrows. These are called trace fossils. It is the mark or hardening remains of a plant or animal that lived thousands or millions of years ago. Some fossils are leaves, shells, or skeletons that were preserved after a plant or animal died.

Fossils can be identified in the following ways:

a. The impression of a whole or a part of any organ of the dead body remains in hard ground or stone.

b. The whole skeleton of animals and plants is pressed into rocks.

c. Fossils are identified by morphology.

Fossils are mainly formed due to the following reasons:

a. If the animal has hard body parts, the chance of fossilization increases.

b. The organism must be covered by protective materials shortly after death.

They are the main source of coal and petroleum.

A mineral is a naturally occurring inorganic solid, with a definite chemical composition, and an ordered atomic arrangement. This may seem a bit of a mouthful, but if you break it down it becomes simpler. Minerals are naturally occurring. They are not made by humans. Minerals are inorganic. Mineral fuel is the mixture of hydrocarbons (about 90% to 95%) and other substances like oxygen, nitrogen, sulfur, etc.

Some of the importance of mineral fuel is as follows:

Coal is a combustible black or brownish-black sedimentary rock with a high amount of carbon and hydrocarbons. Coal is classified as a nonrenewable energy source because it takes millions of years to form. Plants and animals, which died millions of years ago, got buried beneath the Earth. They got covered underclay and sands, which prevents oxygen of air from reaching them. Due to high temperature and pressure inside the Earth, those dead bodies got decomposed in the absence of oxygen. This results in the formation of coal.

The importance of coal are: