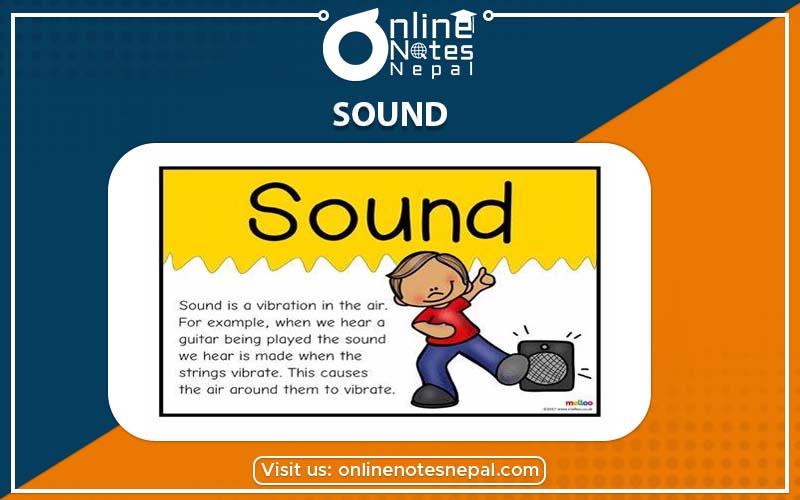 Since early morning till late evening before we go to bed, we have different kinds of sound from the various sources. We hear sound while we talk, listen music and different types of noises made from different sources as the transporting vehicles, birds and animals etc. Sound is a form of energy Source of sound: For the production of sound wave we need a vibrating object. Sound waves can travel through solid, liquid, and the gaseous medium. A ringing bell produces sound waves. The body of the bell when it vibrates above a certain limit of vibration, we get sound wave. To get a continuous wave we need a constant source of the vibrating object.

The nature and quality of sound wave depends on the mode of frequency the source produces. Some vibrating sources produce sharp note (sound) where as the other might give a dull note. In general the sound waves produced from the metallic vibrations are sharper than those produced from the non-metallic or flexible objects.

The sharp or dull sound is due to the high or low pitch of the sound wave. In the stringed musical instruments, high pitch is produced when the string is taut. Similarly the pitch in the female voice is high compared to the male voice.

Loudness is related to the energy in the sound wave. It is a physical perception of the sound intensity. The radiant energy transmitted normally per second per unit area by a wave is known as intensity. The loudness of a sound wave is a measure of the power stimulating the ear. It also depends on the sensitivity of ear and on the intensity of the particular sound.

Sound wave needs a materials medium for its propagation. It can travel through, a solid, a liquid or a gaseous medium. In our daily life we get sound which is propagated through the air medium. Waves can travel in two different modes as (a) longitudinal (b) transverse. But sound is a longitudinal wave. If you drop a pebble gently in a calm water pond, the water waves gradually travel forwards from the centre in the form of ripple. They travel towards the bank of the pool. The point where the pebble is dropped acts as the source for the wave. Here the water waves travel in the form of longitudinal mode. you can do this experiment in a large plastic bucket in your home.

We get sound waves which is propagated through the air medium. Like the water waves, discussed above, sound also travels in the form of wave. The speed of sound wave in air at normal temperature is about 332 metres per second. In the lequid medium like water, its speed is around 1450-1500 meters per second. In a solid medium its speed still increases.

For the propagation of sound wave it needs material medium, as a solid, a liquid or a gas. Earth is surrounded by a thick layer of atmospheric air. Air is a mixture of different kinds of gases. It mainly contain nitrogen and oxygen. It also contains a small proportion of carbon di-oxide and traces of other gases. The sound wave which we get generally travels through the gaseous medium. Sound waves cannot travel through vacuum. On the moon's surface, as there is no air, sound waves cannot travel as they do on the earth's surface.

Sound can travel through the liquid medium. If we ring a bell inside the water the sound is heard outside. the aquatic animals like the whale, dolphin, etc communicate through sound in water.

Sound can transmit through solid medium also. It can be understood well by the following activity:

In your school ask one of your friend to put his ear pressed against the class desk at one edge of it. Now scratch the desk very gently at its other end. He will get the scratching sound very clearly. Repeat the procedure for the second time. But this time he is in his normal 40 Science and Environment, Class - 6 position and his ear is not in contact with the desk. It will be found that the scratching sound will be distinct and clear in the first case than in the second case. In the second case the sound received will either be very faint or not audible. Thus we find that the speed of sound in the solid medium is greater than It is in the gaseous medium. The speed of sound wave in iron is about 5000 metre per second.