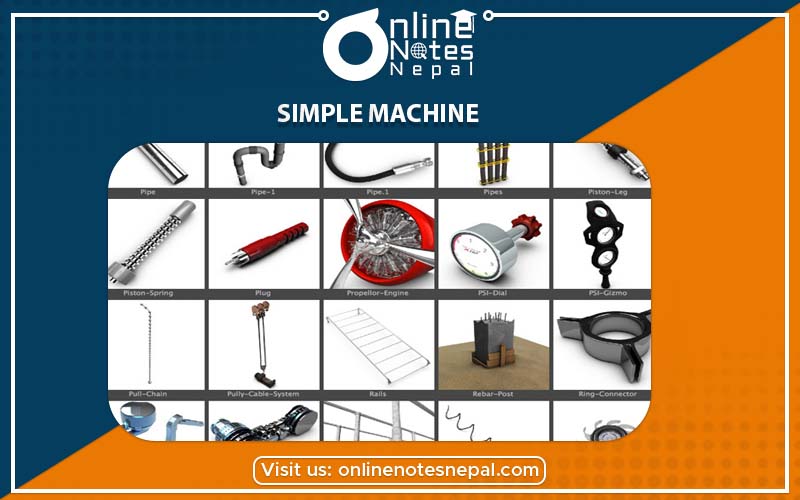 Different types of tools are used in our home, school, factory, office, etc. Tools like scissors, net cracker, pulley, axe, sickle, pliers, screw driver, wheelbarrow, crow bar, etc help us to do different types of works in a convenient and easy way. These tools which help to do the work easily and more conveniently are known as the simple machines. A knife and a "chuleshi" help for cutting potato, onion, etc in a convenient way. Similarly scissors help to cut the cloth smoothly.

Function of a simple machine:

Draw a table as shown below. Name ten such tools and give their functions. A few samples are given below:

A simple machine has only one type of tool in its mechanism. But in the complex machine, there will be the combinations of many tools (in its mechanism). The different tools are arranged in such a Unit - 3 16 Science and Environment, Class - 6 way that they jointly work to achieve the desired job to be done. In the domestic sewing machine there are many different component parts. Here each part of the component is itself a simple machine. The function of a simple machine depends on the external manual power. But the complex machine can also be driven by other energy, which is different from the manual power. For example a watch can also be run electrically.

Usefulness of a simple machine

(a) With the use of a simple machine, work can be performed easily and conveniently.

(b) It takes less time to complete the job if a simple machine is used.

(c) The direction of the force to be applied can be changed with the use of the simple machine.

(A) A simple machine makes work easy to do the job:

To do a certain job we have to apply an appropriate force. Without the use of the force, the job will not be done. If a big block of wood, or a log, or a stone (assumed to have 100kg mass approximately) is to be displaced, to perform this job by a single person is quite difficult. We perform the job easily with the help of a crow-bar. It works on the principle of lever. A lever is a rigid bar which is capable of rotating about a fixed point called its fulcrum. The perpendicular distance between the fulcrum and the direction in which the effort is applied is called the power arm, (or, effort arm). Similarly the perpendicular distance between the fulcrum and the direction of the load (or weight to over come) is called the load arm (or weight arm). The effort is applied at a more convenient point and in a more convenient direction. Here the point E where the effort is applied is called the effort point. The point 'W' represents the point where the load is kept. The fixed point F of this system is called the fulcrum. In the crow-bar, the point where it touches the rigid surface acts as the fulcrum F. At the end of the long arm (effort arm), the effort is applied. The load lies over its short arm. Now an appropriate effort at E will move the load 'W' (i.e the stone). In this way by the application of a reasonably less effort a big load can be moved or lifted. According to the principle of lever the effort should be much longer compared to the load arm. A reasonably long effort arm makes the job easy even when the load (weight to be shifted) is much larger than the effort (applied force).

(B) A simple machine helps to do work in less time:

A simple machine helps to complete the job in a lesser time. Let us consider a pair of scissors. It cuts the cloth smoothly in a regular manner according to the need of certain measurement. It is difficult to do the job without it. Similarly, a shovel is used in lifting and moving loose materials, as earth, gravel, sand, snow, etc. Without a shovel the job becomes much troublesome. Now discuss among your friends and mention other simple machines which are used to make the job simpler.

(C) A simple machine helps to change the direction of the external applied force:

A simple machine helps to change the direction of the applied force in a convenient direction. In a simple pulley, we apply the force in the downward direction and consequently the load will move up. Here we can even use our body weight as the external pulling force "E" against the load "W" to be lifted. In the absence of the pulley we have to apply the force in the upward direction. This gives a big 18 Science and Environment, Class - 6 stress in different parts of our body. Similarly in the previous example of stone shifting, if we try the job without the use of any machine, we have to use our manual force in the upward direction. Applying a large manual force in an inconvenient upward direction is quite troublesome. But a simple machine helps to solve this problem and the external force can be used in a convenient direction.