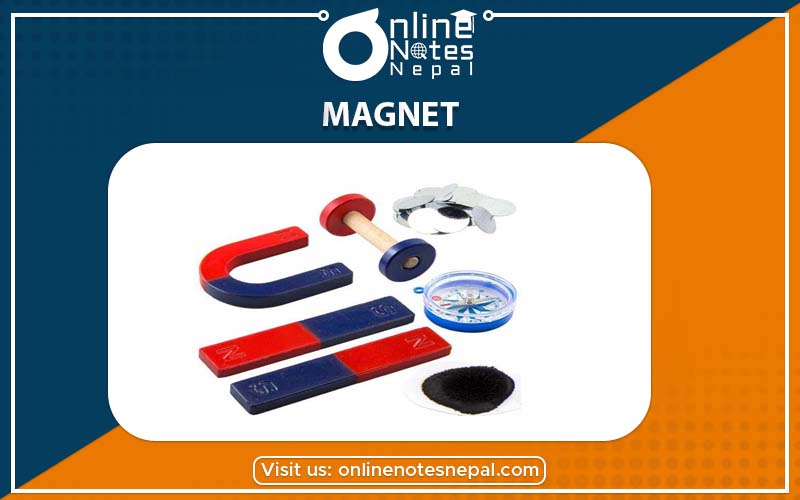 A magnet attracts iron pieces towards it. A magnet can be used to pick up and collect small iron pieces from the floor. It is also used to pull out tiny iron pieces from ear or eye when it happened to enter into them accidentally. Magnet is one of the important component in the constructions of radio, transistor, speaker, telephone and other electric equipments. Similarly it is one of the important component in the construction of electric generators and electric motors. Thus a magnet plays an important role in the development of modern electric equipments. There are two magnetic poles at each end of bar magnet. At one end there is magnetic north pole and at the other end a south pole. The energy of a magnet is termed as the magnetic energy. A permanent magnet has the property of attracting the magnetic materials towards it. The objects which are attracted by a magnet are termed as the magnetic materials. Iron, cobalt, nickel, and some alloys are attracted by a magnet. When a bar magnet in dipped into iron fillings,they stick only near the ends or poles of a bar magnet. It shows that the magnetic effect is concentrated at the poles of a magnet. These poles always occurs in pairs which are of equal strength. Suspend a bar magnet by an unspooned thread, such that the bar is horizontal, when suspended freely. There should be no other magnetic material close to it, in this experiment. The two ends of the bar magnet point north and south poles when it comes to rest. To conform this test swing it by a careful and gentle push on its end. After completing a certain number of swings, it again comes to rest pointing north and south. This property is known as the directive property of a magnet.

3. Magnetic strength is concentrated at the ends of a magnet A magnet has more magnetic force at it sends. It has the least ar about nill magnetic force at its middle line. It can be understood by following activity. The activity shows that like poles repeat and unlike poles attract each other. Take some iron fillings on a sheet of paper. Put the bar magnet over it and then suspended it by an un-spooned thread. It will be found that the stick only near the ends of the bar magnet and no fillings at the middle of the bar.

The north pole of one magnet and the north pole of another magnet, similarly (S-S poles) are like poles. When two similar poles of the magnet are brought close to each other, they get repelled with each other. But the unlike poles (S-N) attract each other. It can be shown using a compass and a permanent magnet. It will be found that N-pole of the compass is pushed away when the N-pole of the bar magnet is brought close to it. Take a razor blade. Break it into two parts along the sharp edge. Keep one piece over a table. Now touch the S-pole of the external magnet at one end of the blade and slide it along PQ as in the diagram. Repeat the process for about 20-25 times. Note the resultant polarity on the razor blade with the  help of a compass. Break the razor blade again into two pieces at its middle. It will be found that there is one new magnetic pole developed at each piece. Check the nature of the new magnetic polarity using a compass. If we divide and sub-divide the razor piece again and again, at each time we get a pair of magnetic poles, however small it may be. This activity shows that magnetic poles always exist in pairs.