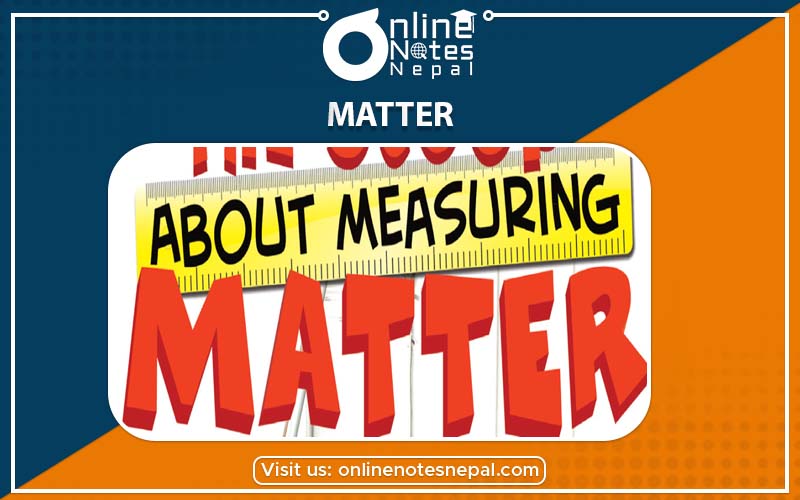 There are different kinds of objects around us. Water, air, stone, table, are some examples of these objects. Every object differs with respect to its colour, odour, size and other properties. But some attributes are common. Can you tell some common properties of above mentioned objects? Water, air, stone, table and book have their own mass. Similarly they all have their own volume. The object which has its own mass and volume is called matter. Each matter is composed from small particles known as molecule. Light, sound, shadow, etc has no mass and volume. So, these are not considered as a matter.

A matter has a definite mass, volume, colour, odour, and taste. These are the properties of a matter. Here, we are going to discuss about the mass and volume of matter.

A. Matter has definite mass Expand your hand and ask your friend to keep a brick on one hand and a piece of wood on the other hand having equal size. Which one do you feel heavier? Brick is heavier than the piece of wood because brick contains more mass than the wood however both are equal in size. Thus each matter has a definite mass. Similarly take two equal size of glasses. Fill one glass with full of water and other one fill with half of water. Hold the glasses and feel which one is heavier and why?

Take two identical size of balloons. In flat one of them blowing air in it. Now hang them at two ends of a straw. The straw is tied wit a string at middle and hanged. Observe which balloon goes down. Balloon filled with air goes down as it is heavier than the empty balloon. It proves that air (matter) has also mass. All of these above activities show that air, brick, wood and water have their own mass. Total quantity of matter contained in an object is called mass of that object. B. Matter has volume.

Take a glass fill with water in it. Take one piece of stone. Put it into the glass. Now observe you will find that the water overflows outside from the bottle. The space occupied by the stone inside the glass is called the volume of that stone. Thus the occupied space of any matter is called volume. States of matter There are 3 states of matter. They are; solid, liquid and gas. In room temperature wax exists in solid, water exists in liquid and oxygen exist in gaseous state.

Every solid matter has its certain shape and volume. Usually these are hard in touch. For example: stone, marble, glass, brick, etc.

Liquid matter has certain volume but no definite shape. It takes as the shape of the container in which it is kept. They flow down. For example: Water, petrol, kerosene, alcohol, etc are some examples of liquid.

Change of states of matter.

Similarly , on heating substance in liquid state changes to gaseous state. For example when water is heated, it changed into vapour. The process of conversion of liquid into gas, on heating, is known as evaporation. In normal pressure (sea level) water boils at 100°C.

Various materials used in our daily life are made up of different substances. For example utensils used in kitchen are usually made up of iron or aluminum. Jewellery is made up of gold and silver. Substances like iron, aluminum, gold, silver, etc are made up of same kind of molecules. They cannot be broken down into new elements. These substances are known as elements. Total number of elements known at present is 118. Among them, 92 elements are natural and remaining are synthesized in laboratory. Hydrogen, oxygen, iron, copper, gold, silver, etc are natural element. While Californium, Einsteinium, etc are artificial elements. In normal temperature, elements exist in all three forms i.e solid, liquid and gas. Gold, silver, iron, etc, exist in solid state. Mercury, bromine, etc exist in liquid state. Hydrogen, oxygen, nitrogen, etc exist in gaseous state.

We usually use sugar, water, salt, etc in our food items. These substances are made up of more than one element. The ratio of combination of these elements is fixed and such substances are called compound. Some other examples of compound are carbon dioxide, soap, etc.

Various materials around us are made up two or more substances. Example: air, muddy water, etc. Air is made up of nitrogen, oxygen, carbon dioxide and dirt. Muddy water is made up of water, soil and various other substances. Tea, we drink, contains water, milk, sugar and tea leaves. Two or more than two substances when brought together do not undergo chemical change and they lie together. Their properties are also not lost. Such combination of substances is called mixture. There are two kinds of mixture. They are among homogeneous mixture and heterogeneous mixture.