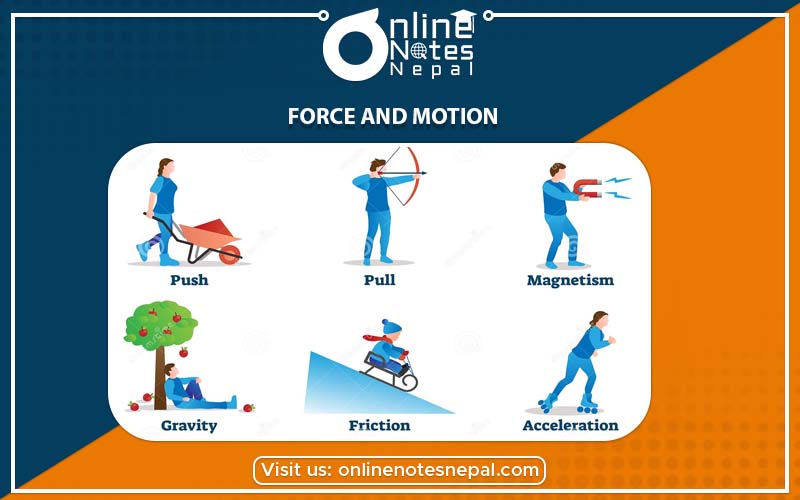 A force always tends to (1) pull, or (2) push an object on which it is acting. Thus the agency that tends to change the state (state of rest, or state of uniform motion) of an object is called the force. The S.I unit of force is newton (N) (1 newton=1 kg.m/sec)

(a) A force can bring motion on a body which is at rest.

When a body changes its positions, it is termed as its motion. In the fig. shown below, some persons are pushing a loaded cart. Similarly in the next fig, a cyclist is exerting his muscular energy to run the bi-cycle. A football player kicks the ball with a certain force to make it move in a certain direction.

(b) A force can bring a moving object to rest.

By the application of the brakes, a moving bi-cycle can be slowed down or even brought to rest. Here the brake exerts the necessary force against the wheel to make that change in the motion. Thus the "external agent" called the force is responsible for all those changes in the state of motion of the object.

(c) A force can produce an acceleration in a body.

(d) A force can change shape and size of object.

A force can also change the shape and size of the object. For example by pressing a soft rubber ball we can change its shape. Similary by stretching a rubber band we can increase its length.

The S.I unit of force is "newton" which is abbreviated as "N". Depending on the nature of work, we need different magnitude of force. For example, the forces which are needed for pedaling a bi-cycle, lifting a small water bucket, running a car, etc.

Motion of an object

On the basis of change in its location, a body can be in following two states:

If a body does not change its position in reference to its surrounding objects, we call the body is at rest. For example the tables, benches, chairs, etc inside a classroom are at rest. Similarly a house, a tree, an electric pole etc are at rest.

If a body changes its position with time relative to its surrounding objects, we call that the object is in motion. For example, a moving bi-cycle, running water, flying bird, etc are in motion. A walking person constantly changes his position with time relative to his/her surrounding. In the same way, a student reaches the school by walking from home.

The motion in which every point of the moving object has simultaneously the same speed and direction of the motion is known as the translatory motion. The physical meaning of translation is the motion of a body in which all the points follow a parallel path.

Tie a small piece of wood or stone, at one end of a thread. Hold the other end firmly. If our hand exert the rotational force on it, the wooden piece will move in a circle. If the thread is released at any point during its revolution, it will fly away. This type of motion is called the circular motion. Take a piece of string of about 50cm. Tie one end of the string on a pendulum bob. Suspend the bob on a rigid support. Now set the pendulum bob to swing carefully through a certain angle. The bob will swing at different positions as, A→B, B→A, A→C, and back. The motion continues for some time. This type of motion is called the oscillatory motion. The gentle breeze generally carries dust particles, along with it. This breeze when strikes against a large rigid surface, will change its direction. We can see this change looking at the random motion of the dust particles. Insects also show random motion in air.

Take some small pieces of paper or light pieces of leaflets of a plant. Now let them fall freely in the open air from a certain height (about 2 metres or so). Do they fall down in a straight path? The light paper pieces will move in different random directions with different speeds during their fall. The motion of a body in which its speed and direction changes continuously is said to be random motion.