We, Our Community and Nation

Some Ongoing Projects in Nepal

Population and Quality of life

Problems of Population Management in Nepal

Internal and External Migration in Nepal

Our Social Norms and Values

Social Problems and their solutions

Zones and Districts of Nepal

Status of Employment in Nepal

Rise and Fall of Rana Rule

Achievements of the Rana Period

Our international relation and co-operation 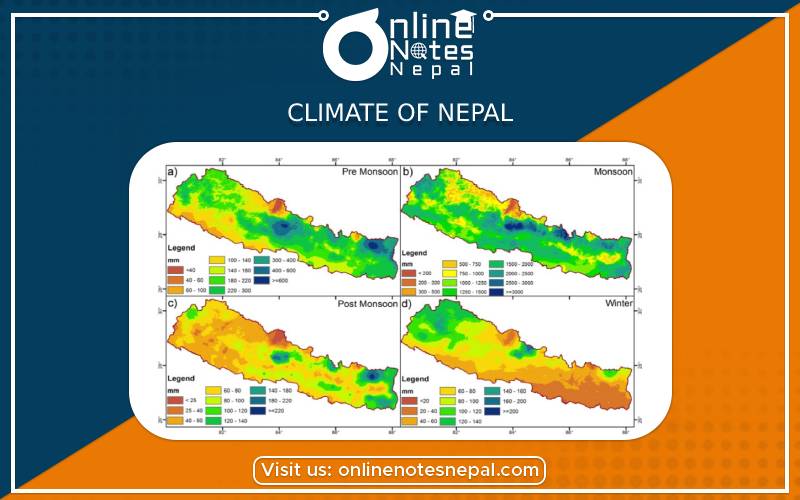 The climate in Nepal varies from subtropical in the lowlands to a cold high-altitude climate in the mountains. The country experiences 5 different seasons: summer, monsoon, autumn, winter, and spring. During winter, the Himalayas block the cold air, causing it to be quite warm south of the Himalayas.

During Chaitra, Baishakh, and Jyestha- the first three months of the period, it is quite hot except in the highest elevations. It is dry, windy, and hazy due to dust. The temperatures go higher in another three months- Asadh, Shrawan, and Bhadra but are somewhat restrained by frequent rains. The monsoon winds pushes from the Indian Ocean, particularly the Bay of Bengal, when blocked by the Himalayan ranges bring heavy rain in most parts of Nepal. It accounts for about 90% of the total yearly rain in the country. Early monsoons reach eastern Nepal and rainfall amounts decrease as we move to the north or to the west of the country. The far north, lying beyond the high mountains, is a rain shadow area. The east receives more than 200 cm of annual rain but the amount is only half in the west. The east is also mild due to its closer distance from the sea. It suffers more landslides and floods triggered by incessant rain during these months.

As Nepal lies within the Indian subcontinent's geographical location on the southern slopes of the great Himalayas, this country has a significant summer monsoon season. Normally, Nepal receives an average of 105 days with around 80% of rains in the monsoon from mid–June to September. The monsoon in Nepal originates from the Bay of Bengal and moves along the southern flanks of the Himalayas. In Nepal, the eastern part of the country receives more rainfall from monsoon precipitation as it is nearer to the Bay of Bengal. There is occasional rainfall during other seasons too, which does not belong to the part of the summer monsoon.

Autumn in Nepal marks the end of showering monsoon months and the best time with moderate temperature, clear mountain views, blue skies, warm days, and scenic views before the winter season. This season generally falls from Mid-September to Mid-November.

Situations are almost completely opposite in the winter period that lasts from Ashwin to Falgun. It gets increasingly colder for the first four or five months. The weather is dry. The winter monsoon winds from an inland region in central Asia are dry and can't cause rain as they lack enough moisture. The temperature measure about 10-18° in the Terai and go on decreasing towards the north. Normal average temperature falls below 0° Celsius in the Himalayas region. Though not in high amount, the western part of the country receives more rain than the east. It is caused by the moist westerly winds coming from the Mediterranean Sea, Black Sea, Persian Gulf, etc. in winter there is a lot of snowfall in the high elevations.

The Spring season in Nepal continues from March till May. It also offers the best time to visit the beautiful country of Nepal. In this particular season, the country attracts a large number of tourists. The months of March-April are considered the second-best season for trekking, the best time being October-November.