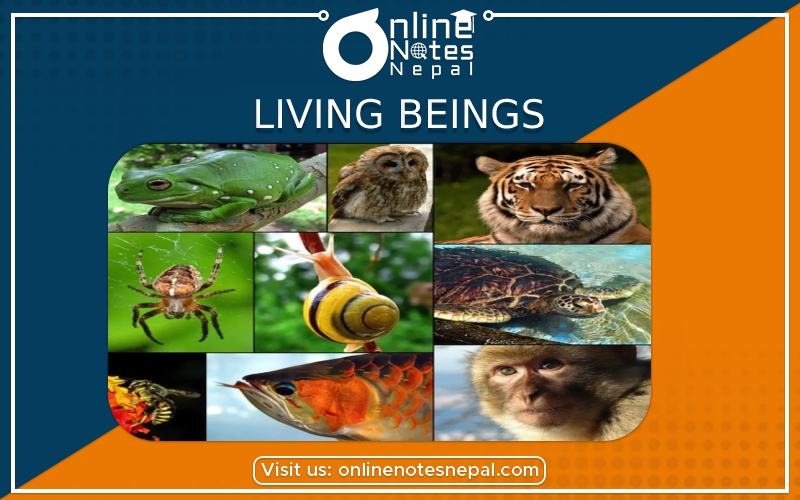 This chapter Living beings contains notes on Virus, Bacteria, Fungi,  Modification of parts of Plants, Seeds. It is the reference notes of Grade 8 Science.

The term virus is derived from the latin word "Viron" which means poison because it infects the living organisms.

Viruses are ultra microscpoic disease producing particles of organix which can multiply within the living cells only.

Virus is a nucleoprotein entity which is able to utilize the synthetic machinery of the living cell of another organism for its multiplication. the branch of biology which deals with the study of virus is called Virology.

Because they are fully dependent on living organism for their growth and multiplication and they cannot survive and multiply outside the living cells.

A. On the basis of host they attack, Viruses are of three types:

The viruses which attack and ingest plants only are called plant virus. For example, Tobacco Mosaic Virus(TMV), it infects tobacco plants.

B. On the basis of type of nucleus acid present in virus, virus are of two types:

Viruses are considered to be the smallest organism made up of nucleic acid and protein. They do not have complete cellular structure. They have different shapes such as rod shaped, spherical, cubicalm hexagonal, polygonal, etc. A virus partical is called Viron. Outside the host body, each Viron is made up of two particles Nucleoid and Capsid.

is made up of a stand of nucliec acid either DNA or RNA. It is the genetic material of virus.

Nucleic acid of virus is surrounded by a protein called Capsid. It is protective in fuction.

Bacteriophage virus has 2 part head and tail. At the place of union with head, the tail bears a plate like structure called collar. The tail rests on a hexagonal basal plate. Each of te six corners of the basal plate bears a long tail fiber. 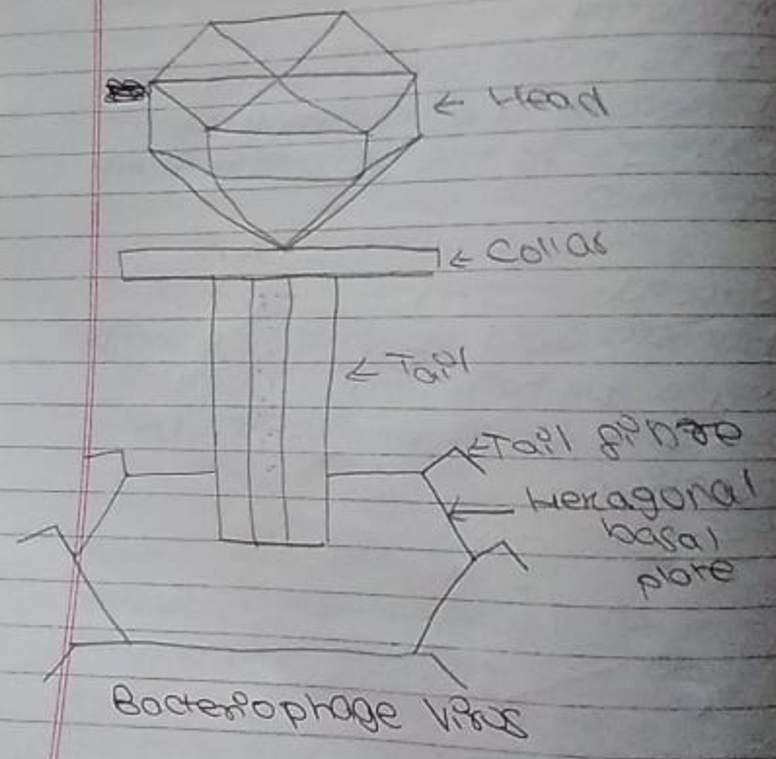 Bacteria are the prokaryptic, unicellular, and microscopic organisms. Bacteriology is the science that deals with the study of bacteria.

The body of bacteria is composed of a single cell which is covered by outer cell wall and inner plasma membrane. Some bacteria may even have a third outermost protective layer called capsule. Bacterial surfaces are covered by pili. Bacteria also has flagellium. cytoplasm spreads uniformaly inside the plasma membrane. Cytoplasm contains nuclear material DNA (deoxyribonucleic acid), ribosomes, vacuoles, etc. Nuclear material is not covered by nuclear membrane.

Most species of bacteria lack chlorophyll and they absorb their food from dead and decaying things (saphrophytic bacteria).
Some bacteria contain chlorophyll and can prepare their food from the body of living things (parasitic bacteria).
Some bacteria live symbiotically in the roots of leguminous plants (Symbiotic bacteria). Symbiotic bacteria is the one which forms association with other organisms in which bacteria as well as the host both are benefitted. For example; Rhizobium bacteria forms association with the root nodules of leguminous plants (pea, beans, etc). Plants provide shelter to the bacteria and bacteria helps to fix atmospheric nitorgen and make it available for the plants.

Fungi is a  group of non green plants which do not have chlorophyll and grow on decaying organic matter. They may be unicellular or multicellular. Yeast is a unicellular fungus and mushroom is multicellular fungus. The branch of biology which deals with the study of fungi are called mycology. Mostly they are saprophytes i.e. they absorb their food from dead and decaying organic matter.

A multicellular fungus consists of a number of white cottony thread like structures called hyphoe. Hyphoe develop in all direction and form a network like structure called mycelium. Mycelium absorb food from the organic matter. The part of mushroom which is seen above the ground is called basidiocarp. Basidiocarp consists of three parts: Pileus, Gills, and Stipe

Fungi cause disease in human beings like dkin disease, allergy. etc.
They cause different types of diseases in plants.
They promote the decaying of fruits, vegetables, and spoil other food products, too.
Some poisonous mushrooms when as food can become the cause of food.

Food stuffs can be kept safe from fungi by keeping them in a fridge.
Fungi can be killed by using fungicides.
Only known and edible mushroom should be used as food.
Good hygiene and sanitation of skin help to protect from fungi.

Modification of different parts of plants:

Roots, stem and leaves are the main parts of plant. Roots grow under soil and absorb water and mineral soils, they also fix the plants firmly to the soil. Stem supports the plant, they also help in gaseous exchange and removal of excess water from the plant. These are the usual functions of root, stem, and leaves.

Modification into different forms to perform following functions for the storage of food. Roots of some plants are modified for the storagr of food. Example; Radish, Turnip.

For the mechanical support:

Additional roots grow from the branches or stem in some plants. They reach the ground and provide mechanical support. Example; Banyan tree.

Roots of some plants contains chlorophyll to prepare food for photosynthesis. Some plants such as water hyacinth have air spaces in their roots to help the plants in floating. Roots of parasitic plants absorb nutrients from the living host.

In sub aerial modification, the stems are partially underground and partially aerial. They grow parallel to the ground. New plants with their own roots grow from the nodes of stem than the soil.  Example; Strawberry, grass, etc.

In some plants, the aerial stems get modified to perform functions like climbing, food storage, food manufacture, etc.

In cactus leaves, they are modified to spines to reduce loss of water. In some plants leaves are modified in the form of tendrils which help the plants to climb on a support.

A seed is a matured ovule that can germinate into a new plant.

Seed coat: It is the outermost layer of the seed.

Embryo: It is the part of the seed which grows to the seedings. It is also called baby plant. It contains two parts under plumule and lower grows into the shoot and the radicle grows into the root.

Catyledon: They are leaf like structures which generally store food and supply it to the developing embryo at the time of germination of the seed. The seed containing only one catyledon is called monocotyledonous seed and the seed containing two cotyledon are called dicotyldedonous seed.

Micropyle: It is a small hole near or above the hilum. It allows water to enter the embryo.

Dispersal of seeds is the process by which seeds are scattered to various places far away from the mother plant by various means.

Factors for dispersal of seeds:

The process of development of an embryo of a seed into a new plant under the suitable condition is called germination.

Conditions for germination of seeds: