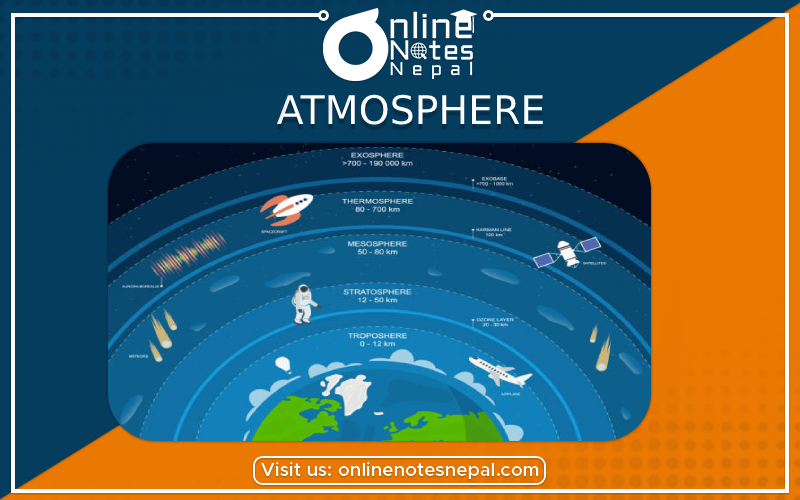 The different layers of air around the earth is called atmosphere. The atmosphere consists of different gases, water vapor and dust particles. The atmosphere is a mixture of nitrogen (78%), oxygen (21%), and other gases (1%) that surrounds Earth. High above the planet, the atmosphere becomes thinner until it gradually reaches space. It is divided into five layers. Most of the weather and clouds are found in the first layer.

Rain, cloud, ice, lightning, fog formation, hail storms take place in troposphere. Troposphere lies just below the stratosphere. The layer above stratosphere helps to stop dangerous ultraviolet rays coming from the sun. In terms of height, the air is divided into five layers: They are as follows:

Earth’s troposphere extends from Earth’s surface to, on average, about 12 kilometers (7.5 miles) in height, with its height lower at Earth’s poles and higher at the equator. Yet this very shallow layer is tasked with holding all the air plants need for photosynthesis and animals need to breathe, and also contains about 99 percent of all water vapor and aerosols (minute solid or liquid particles suspended in the atmosphere). Temperatures typically go down the higher you go, since most of the heat found in the troposphere is generated by the transfer of energy from Earth’s surface.

The troposphere is the densest atmospheric layer, compressed by the weight of the rest of the atmosphere above it. Most of Earth’s weather happens here, and almost all clouds that are generated by weather are found here, with the exception of cumulonimbus thunder clouds, whose tops can rise into the lowest parts of the neighboring stratosphere. Most aviation takes place here, including in the transition region between the troposphere and the stratosphere.

Located between approximately 12 and 50 kilometers (7.5 and 31 miles) above Earth’s surface, the stratosphere is perhaps best known as home to Earth’s ozone layer, which protects us from the Sun’s harmful ultraviolet radiation. Because of that UV radiation, the higher up you go into the stratosphere, the warmer temperatures become. The stratosphere is nearly cloud- and weather-free, but polar stratospheric clouds are sometimes present in its lowest, coldest altitudes. It’s also the highest part of the atmosphere that jet planes can reach.

Located between about 50 and 80 kilometers (31 and 50 miles) above Earth’s surface, the mesosphere gets progressively colder with altitude. In fact, the top of this layer is the coldest place found within the Earth system, with an average temperature of about minus 85 degrees Celsius (minus 120 degrees Fahrenheit).

The very scarce water vapor present at the top of the mesosphere forms noctilucent clouds, the highest clouds in Earth’s atmosphere, which can be seen by the naked eye under certain conditions and at certain times of day. Most meteors burn up in this atmospheric layer. Sounding rockets and rocket-powered aircraft can reach the mesosphere.

Located between about 80 and 700 kilometers (50 and 440 miles) above Earth’s surface is the thermosphere, whose lowest part contains the ionosphere. In this layer, temperatures increase with altitude due to the very low density of molecules found here. It is both cloud- and water vapor-free. The aurora borealis and aurora australis are sometimes seen here. The International Space Station orbits in the thermosphere.

Located between about 700 and 10,000 kilometers (440 and 6,200 miles) above Earth’s surface, the exosphere is the highest layer of Earth’s atmosphere and, at its top, merges with the solar wind. Molecules found here are of extremely low density, so this layer doesn’t behave like a gas, and particles here escape into space. While there’s no weather at all in the exosphere, the aurora borealis and aurora australis are sometimes seen in its lowest part. Most Earth satellites orbit in the exosphere.

The causes of air pollution are as follows:

The effects of air pollution on living organisms are as follows:

The measures that can be adopted to control air pollution are as follows: