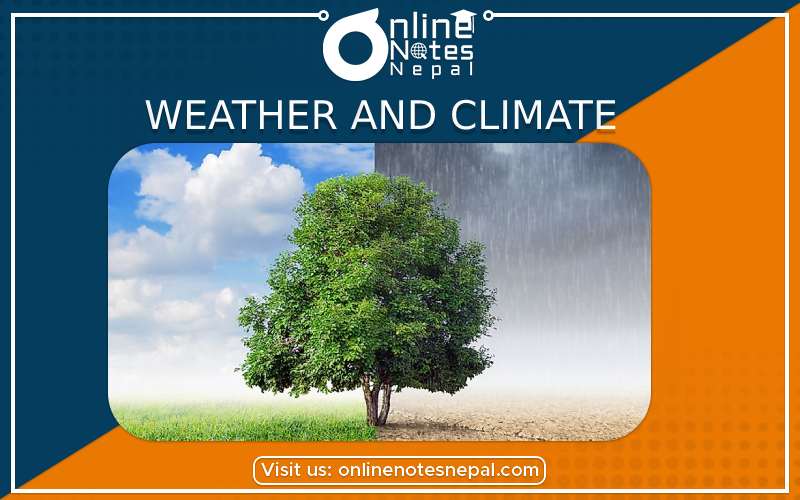 Climate is the long-term pattern of weather in a particular area. Weather can change from hour-to-hour, day-to-day, month-to-month or even year-to-year.

Climate varies with the place. Even within Nepal, we can find the various climate in the different region: Mountain, Hill and Terai. Terai is the hottest region of Nepal whereas mountain is the coldest region of Nepal.

Weather is sub-topic of climate. Weather keeps on changing. Sometimes we can experience heavy rainfall in a particular place but when we go little farther from the place then we find no rainfall at all. The climate is divided into tropical, temperate and tundra. They also have different sub-division.

Difference between Climate and weather:

Equator is an imaginary line around the centre of the planet. It is measured with 180 imaginary lines that form circles around the Earth east-west, parallel to the Equator. It is one most important factor that affects the climate of a particular place. When the latitude increases, the distant from the sun also increases, so the temperature gradually decreases. Equator lies very near from the sun, so direct rays fall over there and it is very hot throughout the year. But poles lie far from the sun. So, slanting rays fall over there and it is very cold. So, cold winter is dominant throughout the year in this areas. No plants and animals can survive on poles particularly the South Pole.

The height measured from sea level is called altitude. At low altitude, there is a thick mass of air which can absorb sufficient amount of sun heat, so it is hot at low altitude. However, when the altitude increases, the temperature also gradually decreases. Therefore, at high altitude, there is very thin mass of air which cannot absorb sufficient amount of sun's heat. So it is cold at low altitude. The temperature decreases by 10C when the altitude increases by 160 m to 165m  distance from the sea and ocean.

During summer, the earth lies near the sun, so perpendicular sun's rays fall over there. The water of sea or ocean gets heated and cools down slowly in comparison to land. In comparison with water, land gets heated faster and cools down fast. As the distance from the sea or ocean increases, the temperature increases. During summer, due to direct fall of sun rays over the sea or ocean, water is evaporated that causes the highest rainfall in this season.

During winter, the earth lies a little bit far from the sun. So, slanting sun rays fall on the earth. As we know that water absorbs more sun heat than the land. So, when the distance from the sea or ocean increases, the temperature gradually decreases as the land cools down fast. Due to less slanting rays during winter, less rainfall takes place as the evaporation takes place. Due to which days in winter are shorter than in summer and less rainfall takes place.

1200-2100 m above the sea level warm climate is found. Here temperature reaches up to 300 C in summer. Deciduous forest is found in this region.

Above 1200-2100 m from the sea level, the cold climate is found. Here temperature reaches up to 150 C in summer. Throughout the year, thisregion is always covered with snow. This region is called tundra region and no any vegetation is found here.

In summer, monsoon causes heavy rainfall. The temperature measures about 10-18° in the Terai and goes on decreasing towards the north. Normal average temperature falls below 0° Celsius in the Himalaya region. The western part of the country receives more rain than the east. It is caused by the moist westerly winds coming from Mediterranean Sea, Black Sea, Persian Gulf, etc.

Monsoon starts with rainfall. In Nepal April to October is pre-monsoon. June, July and August are mid-monsoon. Heavy rainfall occurs in those months. Late monsoon starts from October which relatively has less rainfall. Monsoon is not rainfall, but it is seasonal and periodic storm.

In winter, the land becomes cold and ocean remains hot. Pressure on land is more than the pressure in the ocean. So, wind blows from land to ocean. This is called winter monsoon. In summer, land becomes hot and ocean becomes cold. The pressure in the ocean is more than the pressure in the land. So, the wind blows from ocean to land. In this condition heavy rainfall occurs. This condition is summer monsoon. The Southeast region of Asia in China, Korea etc. monsoon climate is found. Summer is wet and winter is dry in this type of climatic condition.

The moist westerly winds coming from Mediterranean Sea, Black Sea, Persian Gulf, etc. in winter there is a lot of snowfall in the high elevations. In summer, monsoon wind comes from the Bay of Bengal. So, eastern part receives more rainfall in summer.

The south-east part of Pokhara is open and it has got the mountain in the southern part. That is why Pokhara receives the highest amount of rainfall in Nepal, but Manang near Pokhara which gets rain shadow is place getting lowest rainfall in Nepal.

Effects of Monsoon are:

Agriculture of Nepal depends on the monsoon as irrigation is done by the monsoon rain. Monsoon rain wets ground and helps to maintain the level of underground water. Rainfall also helps to produce hydroelectricity in our country.

Sometimes excessive rainfall causes flood, landslide and soil erosion in Nepal. For that disasters, people need to get ready for different environmental conservation methods like afforestation.