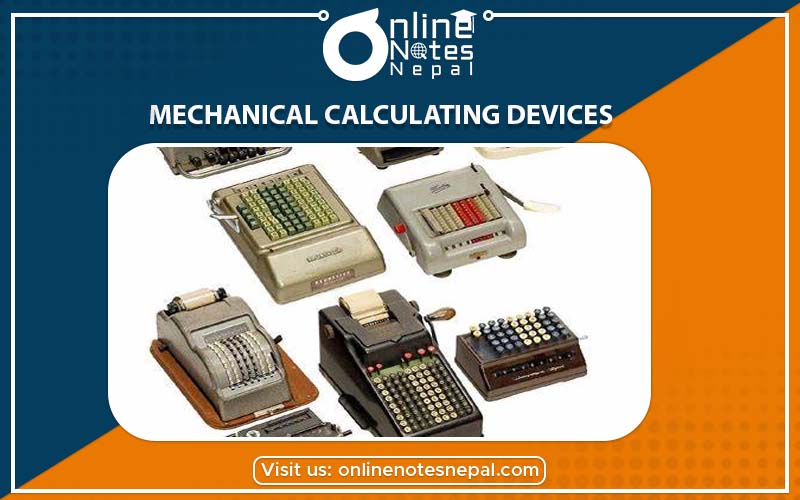 Abacus is known to be the first mechanical calculating device. Which was used to be performed addition and subtraction easily and speedily. This device was a first develop Ed by the Egyptians in the 10th centaury B.C, but it was given it final shape in the 12th centaury A.D. by the Chinese educationists. Abacus is made up of wooden frame in which rod where fitted across with rounds beads sliding on the rod. It id dividing into two parts called ‘Heaven’ and ‘Earth’. Heaven was the upper part and Earth was the lower one. Thus any no. can be represented by placing the beads at proper place. As the necessity demanded, scientist started inventing better calculating device. In thus process John Napier’s of Scotland invented a calculating device, in the year 1617 called the Napier Bones. In the device, Napier’s used the bone rods of the counting purpose where some no. is printed on these rods. The bones are a set of vertical rectangular rods, each one divided in 10 squares. John Napier is also the inventor of logarithms, a concept used to change multiplication into addition. Napier's bones was very successful and was widely used in Europe until mid 1960's. It is mainly used for multiplication table. These rods that one can do addition, subtraction, multiplication and division easily. The Slide Rule is an analog device for performing mathematical computations. The first slide rule was created by British mathematician, William Oughtred in 1620. His device was based on the log arithmetic scale created by British astronomer, Edmund Gunter in 1620, Gunter's work, in turn, was based on the principal of logarithm set forth by Scottish mathematician John Napier in 1614. A simple slide rule consists of two graduated scales, one of which slips upon other. The scales are devised in such a way that suitable alignment of one scale against the other makes it possible to obtain products, quotients or their function by inspection. Blaise Pascal had a father who was an overworked and harassed tax commissioner. The young Pascal developed a mechanical calculator to help him with his work. Pascal started to build it in 1632 when he was 19 and three years later he had developed a machine called Pascaline. In this machine, numbers were entered by dialing a series of numbered wheels, and a series of toothed wheels. Each wheel is printed with the numbers from 0 to 9. When the first wheel made a completed turn from 0 to 9, it automatically caused the second wheel to advance to the next number and so on. It could add and subtract by the movement of wheels. The number of calculating capacity of Pascaline was 9, 99, 99, and 999. It could not be used for division and multiplication. In the year 1671, a German mathematics, Gottfried Leibniz modified the Pascal calculator and he developed a machine which could perform various calculation based on multiplication and division as well.

In the year 1833, a scientist form England knows to be Charles Babbage invented such a machine. Which could keep our data safely? This device was called Analytical engine and it deemed the first mechanical computer. It included such feature which is used in today’s computer language. For this great invention of the computer, Sir Charles Babbage is also known as the father of the computer. Charles babbage in 1823 developed difference engine. Difference engine was first programmable machine ever made. This device was used for solving differential equations. This device has different sections for input, output and storage media. The machine can give results and process it. There are different parts of engine: Input, Mill (processing), Memory, Output ( Results). Ada met Babbage at a party in 1833 when she was seventeen and was entranced when Babbage demonstrated the small working section of the Engine to her. She intermitted her mathematical studies for marriage and motherhood but resumed when domestic duties allowed. In 1843 she published a translation from the French of an article on the Analytical Engine by an Italian engineer, Luigi Menabrea, to which Ada added extensive notes of her own. The Notes included the first published description of a stepwise sequence of operations for solving certain mathematical problems and Ada is often referred to as 'the first programmer'. The collaboration with Babbage was close and biographers debate the extent and originality of Ada's contribution.

The first person to use punched card practically is Dr. Herman Hollerith. Using the punched card, he developed the tabulating machine or census machine which proved to be very efficient. In 1896, he also established Tabulating Machine Company (TMC). he later founded the International Business Machine Company By merging it with other companies in 1933. After graduation from the Columbia University School of Mines in 1879, Hollerith became an assistant to his teacher William P. Trowbridge in the U.S. census of 1880. During the next decade he taught briefly at the Massachusetts Institute of Technology, Cambridge; experimented on air brakes; and worked for the Patent Office in Washington, D.C.

During all this time Hollerith was occupied with the problem of automating the tabulation work of the census. The complete tabulation of the data from the 1880 census had taken seven years, and the 1890 census aimed to collect even more data, leading some to question if the 1890 census would be complete before the next census in 1900. By the time of the 1890 census, he had invented machines to record statistics by electrically reading and sorting punched cards that had been numerically encoded by perforation position.