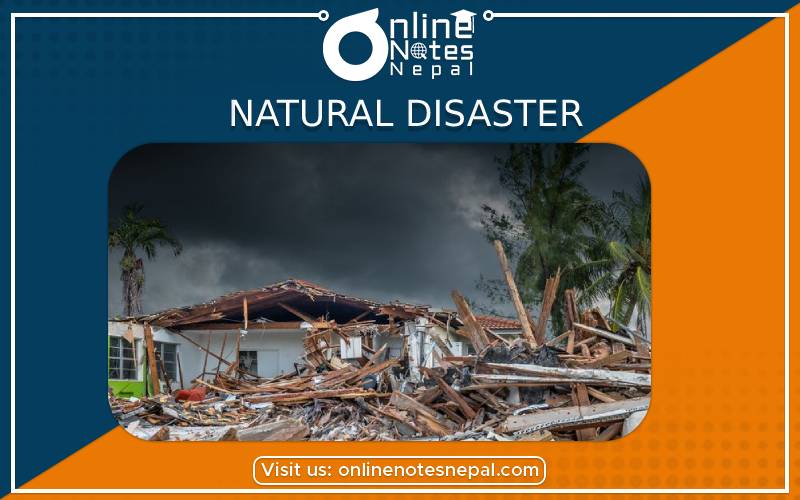 The natural events that cause loss of life and properties and sometimes disturb the ecosystem are called natural disasters. They are always coming at a sudden place and a sudden way. So, we have to be taking preventive measures always as it is full of chaos and unsudden. There are a lot of natural disasters but, in case of Nepal we are familiar more with the given disasters"

The overflow of the dry land when mixed with water from the river or streams is called flood. It is basically the sweeping of everything that is ahead by oveflow of water. In case of Nepal, it is very common because we face a lot of heavy rainfall and we are full of rivers.

Causes of flood are as follows:

Effects of flood are as follows:

Ways of controlling flood  or Preventive measures are:

Causes of earthquake are as follows:

The movement of tectonic plates creates pressure, which generates energy and stores in different places beneath the earth surface. This energy creates faults of rocks. In this process of creation of faults, seismic wave are produced and come out which vibrate the earth. This vibration of the earth is called earthquake.

Such disturbance creates vibration on the surface of the earth and we experience earth quaking. Likewise land sliding, movement of the trains and heavy vehicles on the highway also cause the earthquake locally.

Effects of earthquake on environment are as follows:

The sudden fall of the piece of land due to the force of gravity on mountain, hillside is called landslide.

Causes of landslide are:

The impact of a landslide can be extensive, including loss of life, destruction of infrastructure, damage to land and loss of natural resources. Landslide material can also block rivers and increase the risk of floods.

Ways of controlling landslides or Preventiuve measures are as follows:

1. Use of appropriate agricultural system:

Nepal is an agricultural country, So, most of the people depend on agriculture. Therefore, it is very necessary to preserve the agricultural land from landslide. For this, scientific agricultural technology should be implemented. Terrace farming method is a proper way of cultivation in sloping land.

Generally, erosion occurs at the sides of small streams and rivers of hilly regions where geo-structure of the land is week. Due to this, the breadth of such streams and rivers are increasing each year. This process can be controlled by making check dam with retaining wall, using bamboos, wood etc on either sides of the streams and rivers. Besides this, the landslide can be controlled by planting deep rooted plants or other green grasses on either side. Thus the way of controlling landslide with the help of physical construction and green plants is known as bio-engineering technology.

A volcano is a place through which molten rocks and gases escape into the surface of the earth or into the atmosphere.

The effects of volcano eruption are as follows:

Ways to be safe from volcano or Safety measures of volcano are:

Cyclone is a very powerful and special type of storm formed in big seas or oceans growing upwards forcefully with rotated core of clouds.

Some of the precautions that should be taken against cyclone are as follows: